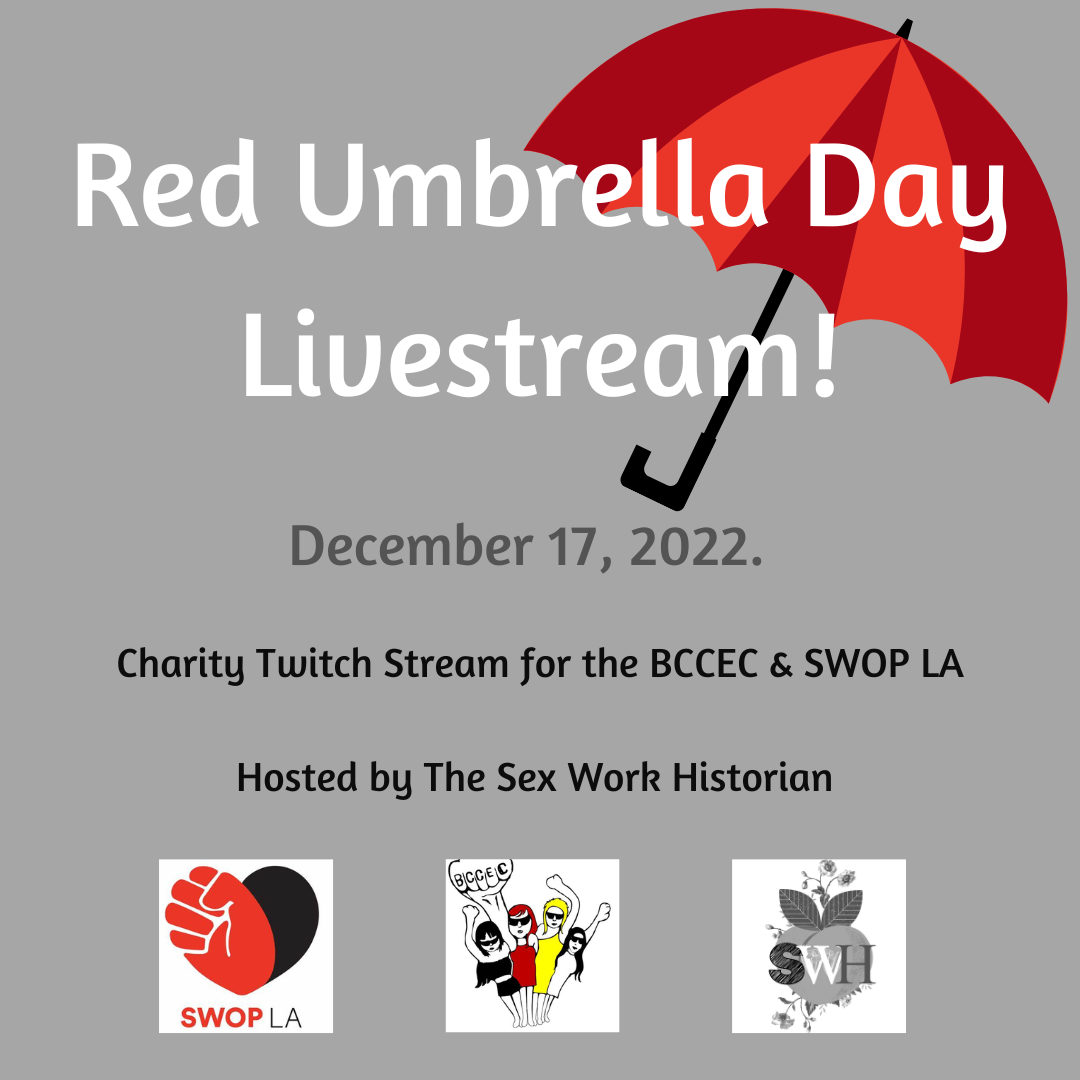 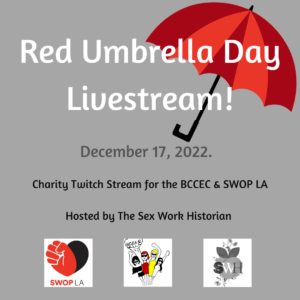 This year on Red Umbrella Day, SWOP LA and the BCCEC in Vancouver are running a charity Twitch Stream in support of both of our groups! Come and listen in while sex workers from the US and Canada discuss the issues facing our community and the ways allies can support us!

The Sex Work Historian will host members from both groups and lead an 8 hour discussion LIVE!!!!

Join us to support sex workers rights and freedom !!!

International Day to End Violence Against Sex Workers is observed annually on December 17 by sex workers, their advocates, friends, families and allies. Originally conceived as a memorial and vigil for the victims of the Green River Killer in Seattle, Washington, US, it has evolved into an annual international event. The day calls attention to hate crimes committed against sex workers worldwide, as well as the need to remove the social stigma and discrimination that have contributed to violence against sex workers and indifference from the communities they are part of. Sex worker activists also state that custom and prohibitionist laws perpetuate such violence.

Violent crimes against sex workers go underreported, unaddressed and unpunished. There really are people who don’t care when prostitutes are victims of hate crimes, beaten, raped, and murdered. No matter what you think about sex workers and the politics surrounding them, sex workers are a part of our neighborhoods, communities and families.

The red umbrella is an important symbol for sex worker rights and is used for events that are held on December 17. The red umbrella symbol was first used by sex workers in Venice, Italy, in 2001. Slovenian artist Tadej Pogacar collaborated with sex workers to create the “Prostitute Pavilion” and CODE: RED art installation for the 49th Venice Biennale of Art. Sex workers also held a street demonstration, the Red Umbrellas March, to protest inhumane work conditions and human rights abuses.[3]

The International Committee on the Rights of Sex Workers in Europe (ICRSE) adopted the red umbrella as a symbol of resistance to discrimination in 2005. A corresponding march was organised as the closing event to the European Conference on Sex Work, Human Rights, Labour and Migration conference, held in Brussels, Belgium, at which almost 200 participants appeared.[3]

To register for this event email your details to susie@nakedtruth.ca